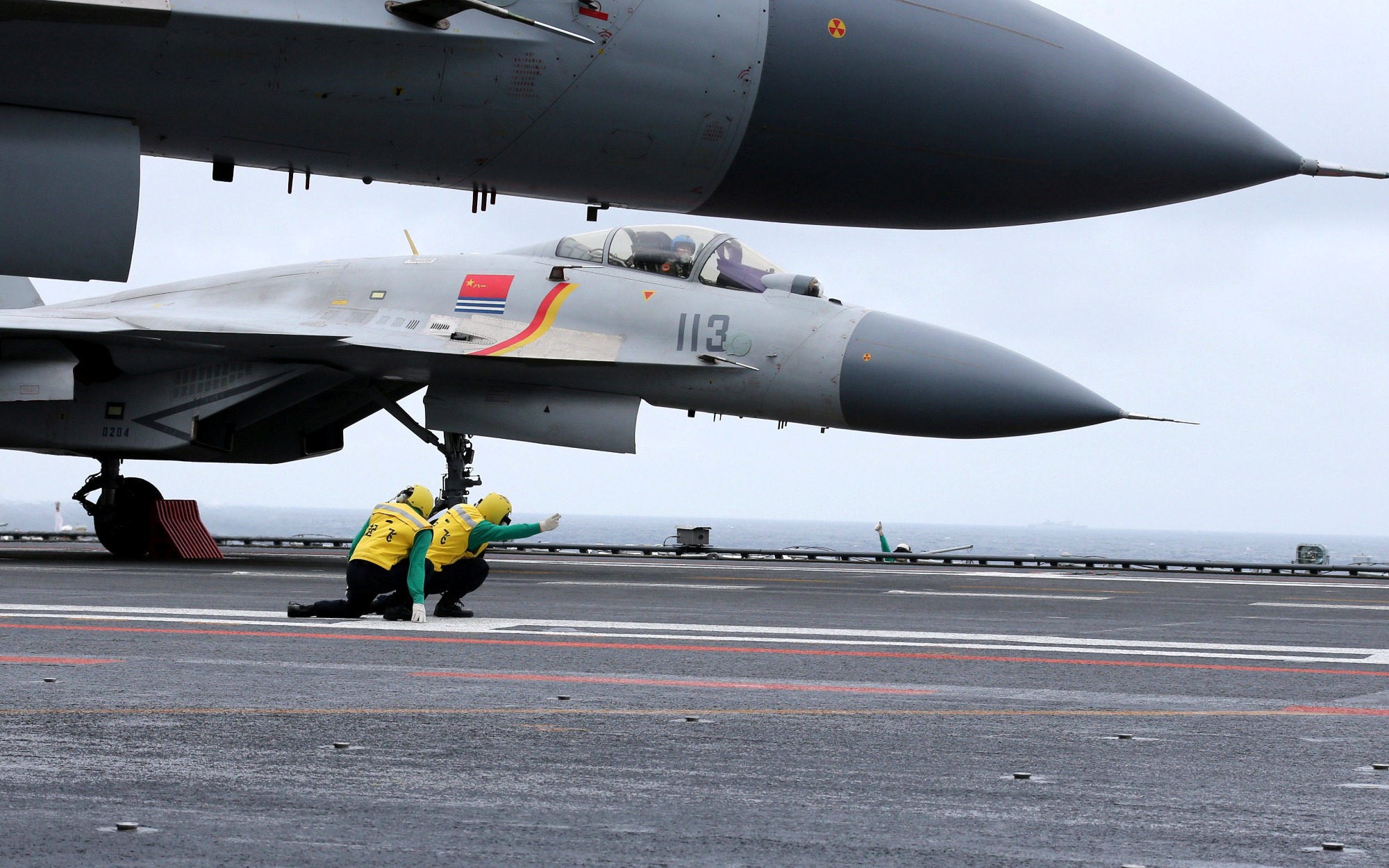 Here’s What You Need to Know: While the Su-33 is probably superior to the J-15 in reliability and engine power, the J-15 is simply a more modern aircraft.

Back in 2018, Sputnik International put out a piece bashing China’s based J-15 carrier-based fighter jet, describing it as having problems with its flight-control system. But the J-15 is itself a derivative of the Russian Su-33 Flanker. Is the Chinese jet really that inferior to the Russian one? Or are the problems shared, and the article an attempt to distract from the Russian fighter’s own failings?

The beginning of the article begins with a criticism of the J-15’s weight and ski-jump launching mechanism. As the jet is heavier than its western counterparts, and relies on a “ski-jump” at the end of the runway to get airborne, it can carry fewer armaments and fuel. But this was the original Soviet design concept for carrier operations.

The Liaoning (originally the Soviet Varyag) was designed with the ski-jump because it was designed to support the Su-33 and MiG-29K fighter aircraft, which weren’t designed to be catapulted off the deck. This made carrier operation simpler, albeit with the aforementioned disadvantages. Sputnik’s criticism rings hollow: the PLAN is simply utilizing the carrier as it was designed: by the Russians.

The PLAN is even planning to improve this aspect, and catapult-launched versions of the J-15 are reported to be in development. Photos have been seen of J-15s with modified nose gear that could be used with catapults.

The second, more valid criticism is that the J-15 is an underdeveloped version of the Su-33. Since China bought only the prototype of the Su-33, the T-10K3, they had to reverse-engineer this airframe. China then subsequently attempted to acquire Russian Su-33s in 2006 and 2009, but these negotiations appear to have fallen through, resulting in China pushing forwards with the indigenous J-15 program.

The Russian experts criticism of the J-15 as being immature in development are mostly valid. Most of the problems with the J-15 stem form its underdeveloped indigenous WS-10 engines. The inability to produce satisfactory domestic engines has been a perennial thorn in the side of the Chinese aerospace industry, which has been reliant on Russia for engines for its Flankers.

That being said, the criticism often cites the many crashes of the J-15 as evidence of the fighters deficiencies. Operating fighters from a carrier isn’t easy even in ideal conditions, and the original Su-33 design also crashed multiple times in 2016 when the Admiral Kuznetsov was deployed to support Russian troops in Syria.

The Su-33 itself hasn’t even seen that many upgrades since the early 1990s, only undergoing light upgrades. Russian naval aviation appears to be more focused on procuring the newer MiG-29KR, a lighter airframe. The Su-33 only has one semi-multifunctional display in its cockpit, limiting its ability to employ precision guided munitions and use modern navigation techniques. Upgrades have not changed this, only adding new bombing systems and giving the pilot a digital kneepad in lieu of a cockpit refit.

China on the other hand, has built the J-15 to its latest standards of cockpit design and ergonomics. A picture of the J-15’s cockpit show multiple MFDs in the cockpit, and an F/A-18-inspired control panel under the hold.

Overall, while the Su-33 is probably superior to the J-15 in reliability and engine power, the J-15 is simply a more modern aircraft and is integrated with modern ergonomic design concepts. China’s effort in tearing down the airframe and (even imperfectly) understanding how it works has allowed them to thoroughly modernize it and develop new variants of it. This has allowed them to build a modern carrier-based fighter, while Russia’s Su-33 remains stuck in the 1990s with analog instruments and a simple HUD.

Even Sputnik’s expert, Vasily Kashin, states at the end of the article: “By spending some more time and money, the Chinese will apparently solve the problems they now have and will get a fairly reliable and powerful carrier-based fighter.”

Fri Feb 19 , 2021
Israel and the United States are developing the Arrow-4 air defense system, which builds on a thirty-year legacy of building and testing anti-ballistic missile systems. The current development was announced on February 18. The Israel Missile Defense Organization and the U.S. Missile Defense Agency commence development of the Arrow-4 Weapon System, Israel’s Ministry of Defense said.